Antiques became popular during the Republic of China, which was one of the peaks in the history of Chinese antique porcelain. Famous kiln porcelains of various kilns in the past dynasties were imitated in the Republic of China, ranging from Eastern Han celadon to Qing Dynasty enamel and famille rose. Commonly seen are celadon imitating the Three Kingdoms, Jin Dynasty, Southern and Northern Dynasties, white porcelain imitating the Sui, Tang, and Five Dynasties, imitating the five famous porcelains of Ru, Guan, Ge, Ding and Jun in Song Dynasty, imitating blue and white porcelain of Yuan Dynasty, and blue and white porcelain of Ming and Qing Dynasties. Doucai, famille rose, enamel and monochromatic glaze. 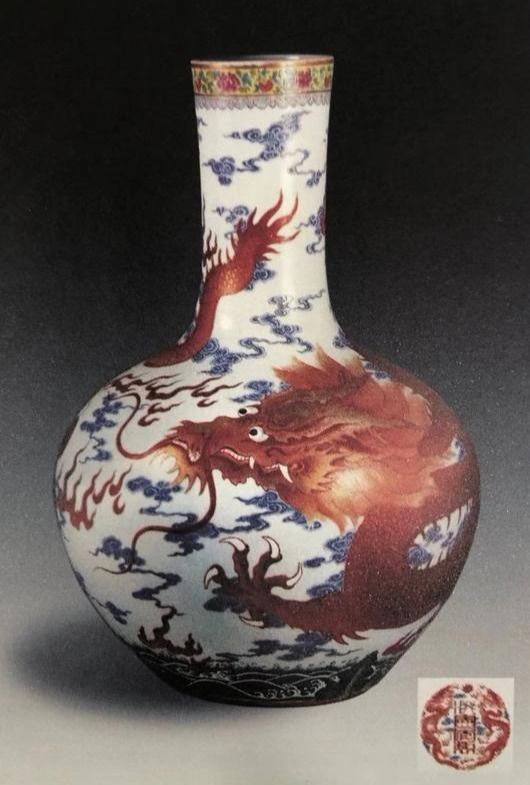 During the period of the Republic of China, the center of China’s ceramic industry was still in Jingdezhen, and Jingdezhen porcelain was still the mainstream of porcelain production in the Republic of China. In the early days of the Republic of China, the daily life porcelain produced in Jingdezhen was rougher, while the antique porcelain became more prosperous than in the late Qing Dynasty and became a prominent phenomenon in this period. After the 1911 Revolution of 1911, the closure of the imperial kiln factory allowed a large number of artisans and painters who worked in the imperial kiln factory to transfer to civilian kilns or to establish themselves. Since there was no imprisonment, they also brought the types, patterns, craftsmanship, and technology of the original imperial kilns that were kept secret and closed to the folks. This promoted and promoted the development of antique porcelain in the folk kilns of Jingdezhen. Porcelain became a mainstream of Jingdezhen porcelain industry at that time. 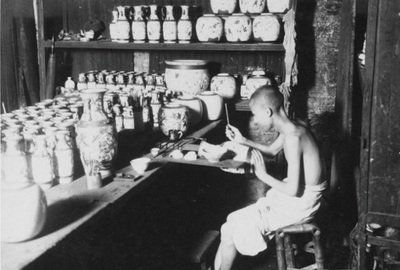 Ceramic Painters in the Republic of China 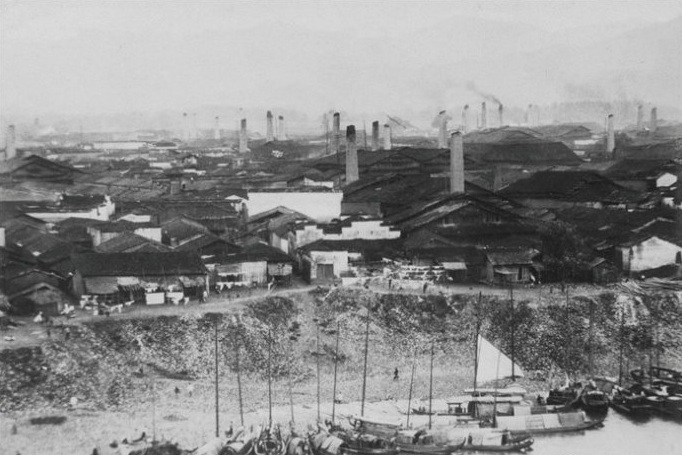 Jingdezhen in the early Republic of China

At that time, antique porcelain workshops, large and small, were scattered all over the streets of Jingdezhen, with a dazzling variety of varieties, varying quality, and varying prices. And Huangjiazhou at Nanmen Wharf has also formed a large-scale distribution center for antique porcelain. Porcelain merchants from all over the country are in an endless stream, reflecting a prosperous scene. 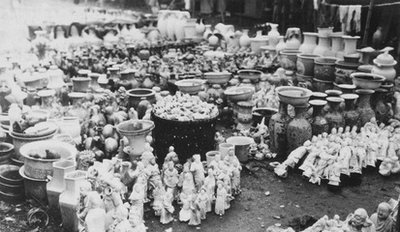 Mass production of antique porcelain during the Republic of China

During this period, a large number of antique porcelain was concentrated on the official kiln porcelains imitating the Ming and Qing dynasties, most of which belonged to the porcelains of the Kang, Yong and Qian dynasties, especially during the Qianlong period.

When discussing antique porcelain at the beginning of the Republic of China, Xu Zhiheng’s original Ye Zhemin’s “Yin Liu Zhai Shuo Porcelain Translation and Annotation” said: “From the end of the Qing Dynasty to the recent days, the imitated products have been very advanced, one is due to the official kiln Skilled craftsmen are scattered everywhere, and the prohibition is repealed or relaxed. The tributes that were not dared to imitate in the past are now ubiquitous.” “The texture of porcelain…The exquisite imitations in recent years have come close to Qianlong, if compared with Daoguang It’s too late.” The glaze color is “extremely light, almost like Qianlong.” In the Republic of China, blue and white, famille and multicolored are still the mainstream of porcelain decoration. There are also buckets, red and green colors, colored glazes and a small amount of enamel. The shape of the utensils basically follows the style of the late Qing Dynasty, but is influenced by foreign industrial products. The shape is simpler and straighter than the late Qing porcelain. It is often in simple shapes, such as Cong-style bottles, lantern bottles, flat pots, etc. Square bottles, cylindrical bottles, etc. There are also a wide range of decorative themes, including characters, landscapes, flowers and birds, and auspicious patterns such as peonies, dragons and phoenixes, pine cranes, eight treasures, magpies and plum blossoms are common. Characters often include the Eight Immortals, infant play, the seven sages of the bamboo forest, the story of the Three Kingdoms, and the Twenty There were also many plum, orchid, bamboo, chrysanthemum, and Bogu patterns that were favored by literati and others. It is also common in all dynasties, especially Qianlong in the Qing Dynasty. 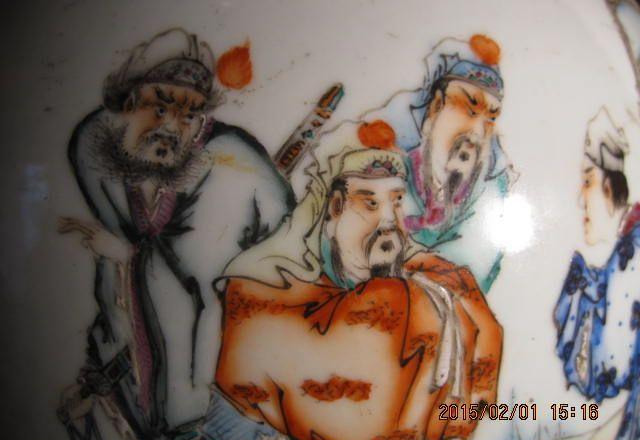 Although the antique porcelain of Jingdezhen in the early period of the Republic of China has been greatly developed, because of the absence of the imperial kiln factory’s clear rules and precepts, the original rigorous precision of the imitation of the official kiln has also been lost, coupled with the restrictions and restrictions on the conditions of the folk kiln. The production is extensive, and the porcelain wares made are rougher than those made by the imperial kiln. Both the fetal bone and the enamel are difficult to match the imperial kiln. In order to cover up the lack of glaze, the most common antique porcelain of this period is the utensils. The outer wall is full of ornaments, and the inner wall and bottom of the utensils are hung with green or emerald, and the characters are mostly in red seal “qianlong reign”. 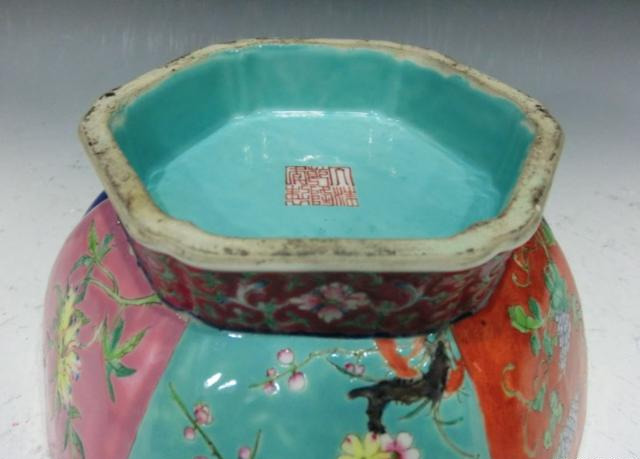 Generally speaking, the appearance of the folk imitated official kilns during the Republic of China was not as good as the original imperial kilns imitating the previous ones. However, the “Guyuexuan” porcelains that appeared in the early Republic of China were outstanding ones with the appearance of imitating the painted enamels of Qing Kang and Yongqian porcelain. “Guyuexuan” was considered by many sources to be another name for Kang Yongqian enamel. However, based on Yang Xiaogu’s “Guyuexuan Porcelain Research” and the fact that there is no reference to “Guyuexuan” found in the enamel porcelain of the Qing Dynasty, it can be inferred that “Guyuexuan” should have nothing to do with the Qing Dynasty enamels. In the late Qing Dynasty and the Republic of China, some Jingdezhen or foreign porcelain masters specialized in imitating the Kang Yongqian porcelain body painting enamel, and processing and transforming on the basis of imitation, also known as “heavy industry famille rose”. From the point of view of its production process, it has certain characteristics of enamel porcelain, which is not equivalent to Qing court enamel porcelain. 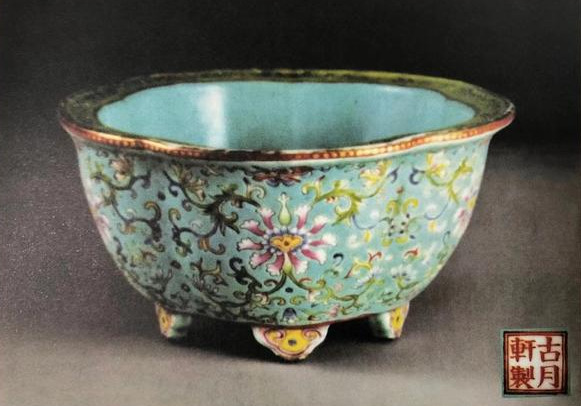 In the 19th year of the Republic of China (1930), Shi Dezhi’s “Guyuexuan Famous Porcelain” album was very popular in the market when it came out, and it caused an upsurge in the collection of Guyuexuan porcelain. It should be said that it was developed in Jingdezhen during the Republic of China. The history has been painted with a strong and colorful stroke, and it has become another wonderful flower in Chinese porcelain. After the extinction of porcelain painting enamels in the three dynasties of the Qing Dynasty, its imitation technology provided important materials for the inheritance and exploration of enamel porcelain.