The porcelain-making technology of the Qing Dynasty kept improving, and the antique style prevailed. By the Qianlong period, the porcelain antique technology had reached the level of free and easy use. The varieties of antique porcelain at this time were all-encompassing, mainly including the following types: First, the glaze antique, imitating the five famous kilns of the Song Dynasty and the products of the former dynasty. The second is the blue and white antique, imitating the blue and white of Yongle and Xuande in the Ming Dynasty, from the color of the blue and white to the shape and decoration of the utensils. The third is the antiquity of Doucai. Chenghua Doucai in the Ming Dynasty was the key imitation burning object, which was mainly inherited in technique.

The new varieties of this period include antique bronzes, imitation red lacquer and other imitation handicrafts, as well as imitation porcelain of animals and plants. They can accurately express the color and texture of the imitation objects, which can be called ingenious workmanship and formed Qianlong porcelain. One of the major features. Among these antique porcelains, some varieties were fired according to Emperor Qianlong’s will. In the Qing palace archives, you can see the approvals given to the pottery officials by Emperor Qianlong. From the approvals, we can see that the emperor had very specific instructions on the firing of porcelain. .

The small mouth of the bottle is slightly pointed, the neck is short, the shoulders are plumped, and the feet are closed gradually below the shoulders. Three sheep heads embossed on the shoulders. Imitation Ru glaze is applied to the whole body. Three-line and six-character seal script in the blue-and-white script “Qing Qianlong Years” in the foot inside. 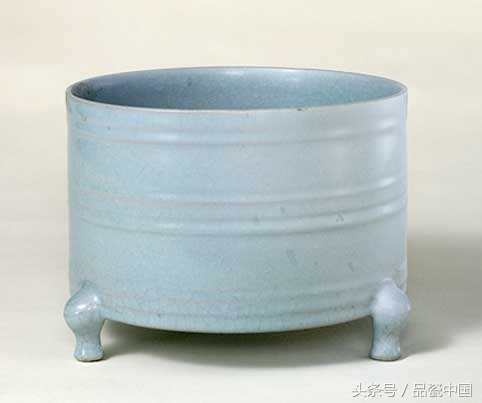 The imitation of porcelain from the five famous kilns in the Song Dynasty became popular in the Ming Dynasty, and the imitation of Ru kiln porcelain was the most realistic in the Yongzheng and Qianlong dynasties. Among the handed down, most of the Ru wares from the Qianlong period were imitations of the glaze color, and the shapes were mostly the popular styles of the dynasty. This vessel is decorated with three sheep, because “sheep” and “yang” are homophonic, meaning “three suns open Thai” to show good luck. 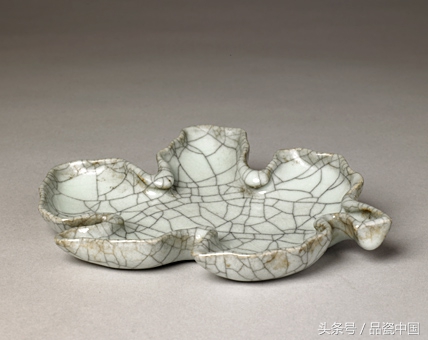 Washed into a leaf shape, the edge of the leaf is rolled up, like a leaf floating in the wind, it is extremely dynamic. The whole body is full of glaze color imitating the Song Dynasty Ge kiln, with irregular patterns on the glaze surface. There are 6 nail marks on the bottom, and the blue and white “Qing Qianlong Years” three-line six-character seal script. 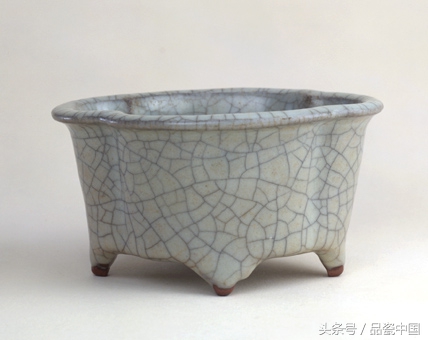 This wash has a unique ingenuity, combining the bionic shape with the characteristics of Songge Kiln porcelain. The glazed surface is plump, the glaze color is blue and the gray is flashing, the whole body is opened with larger patterns, the texture is gray and black, and it is harmonious and natural, giving people a natural beauty and enjoyment. 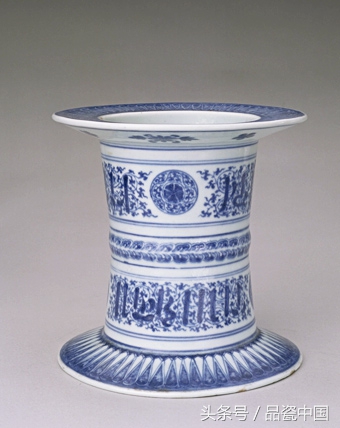 In the Qing Dynasty, the Kangxi, Yongzheng, and Qianlong dynasties all imitated this kind of plate seat, and the imitations of the Qianlong dynasty are the most exquisite. A flower-shaped copper gall is placed in the vessel, which can be used for flower arranging and is a palace display. 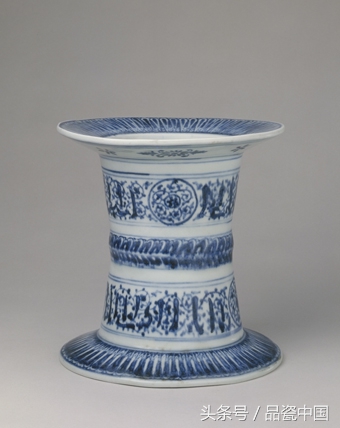 This vessel is commonly known as Wu Dian Zun, and it was fired in Jingdezhen official kilns during the Yongle and Xuande periods of the Ming Dynasty. It originated from West Asian bronzes and was a product of Chinese and foreign commodities and cultural exchanges. In addition to this kind of utensils, the blue and white flower pouring, large flat pot, water injection, and folding basin made in Jingdezhen are also imitated from West Asian bronzes.

From the outside, the blue and white color of Yongyinzuo is deep, and the imitation blue and white of Qianlong period is bright and colorful, lacking the old feeling of the former. 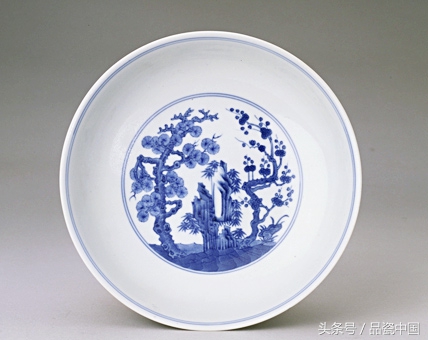 The plate is open, shallow arc wall, and circle foot. Pine, bamboo, plum and mountain stones are painted in the blue and white double circle in the center of the pan. The courtyard figures are painted on the outer wall of the pan. The bottom book is a three-line and six-character regular script in the blue and white “Reign of Qianlong in the Qing Dynasty”.

During the Qianlong period of the Qing Dynasty, with the rise of antique fashion, the Jingdezhen imperial kiln factory fired a large number of blue and white pine, bamboo and plum pattern plates imitating the Ming and Xuande period. Their shape, size, and pattern layout are exactly the same as the original ones. Don’t write the money. There are two kinds of styles, one is the “Da Ming Xuande Years” and the other is “The Qing Qianlong Years”. 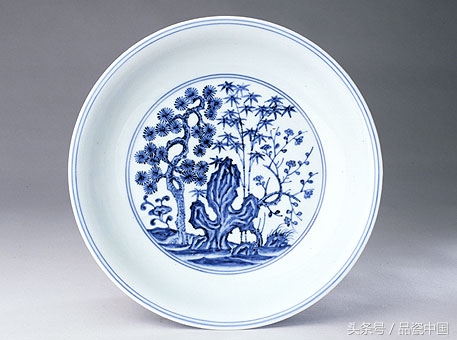 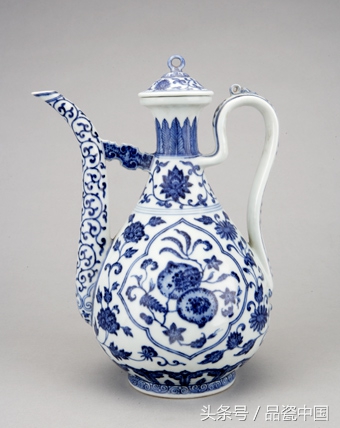 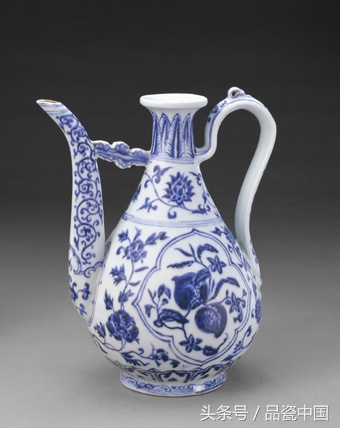 Yuhu spring style holding pots were more popular in southern kilns from Yuan Dynasty to the beginning of Ming Dynasty. The holding pots of Ming Yongle and Xuande periods were the most beautiful, and they were imitated in various dynasties of Qing Dynasty. The body and decorations of this pot are imitated by the Xuande blue and white three-fruit holding pot, which is slightly stiffer than the Xuande holding pot, and the texture is more delicate and white. The blue and white are brightly colored, and there are dense small blue and black spots in the dense color, which are caused by artificial dots and have the distinctive characteristics of the Qing Qianlong blue and white ware. 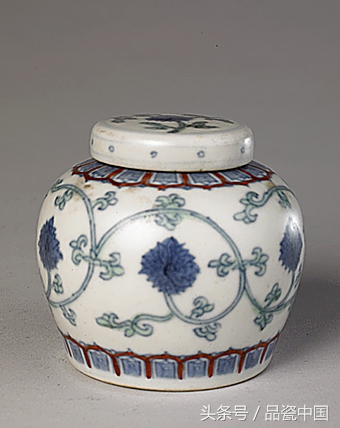 The pot has a straight mouth, a short neck, ample shoulders, a gradual contraction under the abdomen, a flat bottom and shallow feet, and a flat top, straight side and round lid. The whole body is decorated with buckets of color, a blue and white string is painted along the mouth, a lotus petal pattern is painted on the shoulders and near the feet, and six lotus patterns are painted on the abdomen. The cover is painted with blue and white lotus patterns. The bottom is white glaze, the blue and white script “天” in the center is in regular script. 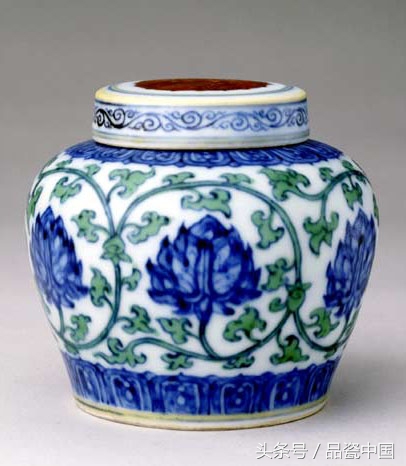 The Doucai Tianzi jar appeared in the Chenghua period of the Ming Dynasty. It was named because of the word “天” in the bottom of the book. The shape, decoration, and style of this jar are all imitated Huadoucai Tianzi jars. The glaze is fine and white, and the color is fresh and elegant. It is an exquisite work of the Huadoucai ware during the Qianlong period of the Qing Dynasty. 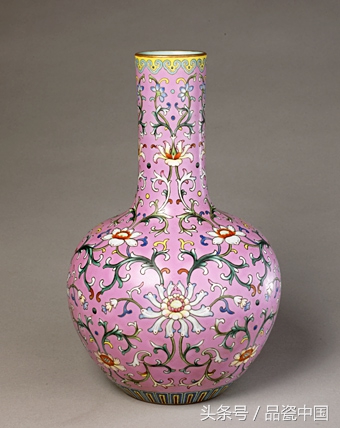 The bottle has a straight mouth, a long neck, a spherical abdomen and round feet.

Famille rose decorations throughout the entire vessel. Under the mouth, there is a yellow and turquoise cloud head pattern. The neck and abdomen are painted in pink and pastel. The theme is decorated with a lotus pattern. The branches and leaves of the lotus are stretched. The branches and flowers are green, white, red, blue, and yellow. Painted between different colors. The lotus petal pattern is painted near the bottom. The ware and soles are all turquoise green glaze. Three-line and six-character seal script in the red color book of the foot internal script “Qing Qianlong Years”. 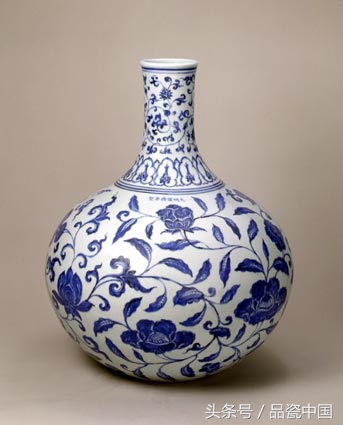 This ware imitates the shape of Xuande porcelain in the Ming Dynasty. The ware has a regular shape, sparse decorative patterns and bright colors. It is a typical porcelain for palace furnishings. 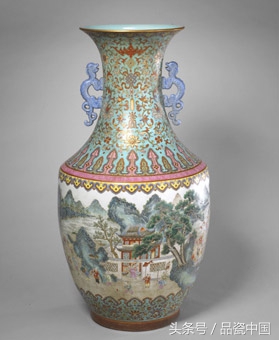 The bottle is pierced, the neck is tied, a pair of ears are decorated on the neck, the shoulders are folded, the abdomen is gradually converged, and the feet are ringed. Light green glaze is applied to the bottle. The outer neck is decorated with a light green glaze pastel wrap pattern. The theme pattern on the abdomen is the white-ground famille-colored baby play pattern, which depicts the many babies playing among the distant mountains and near water, pavilions, pavilions, small bridges, flowing water, and travertine flowers. White glaze is applied to the inside of the foot, and the blue and white three-line six-character seal script of the book “Qing Qianlong Years”. 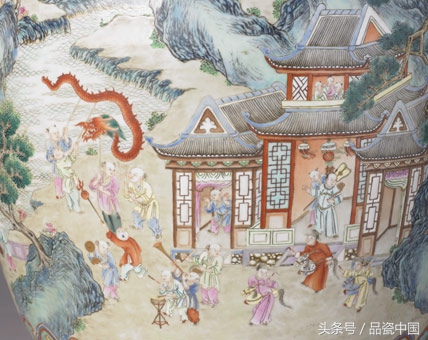 The chin ears of the porcelain vase are imitations of Shang dynasty bronzes, which are quite ancient. The theme patterned baby play picture is a traditional Chinese decorative pattern. The bottle is huge in shape, regular in shape, bright and bright in glaze, delicate and vivid in decoration, and the artistic conception is joyful and festive. It is an exquisite work in Qianlong official kiln. 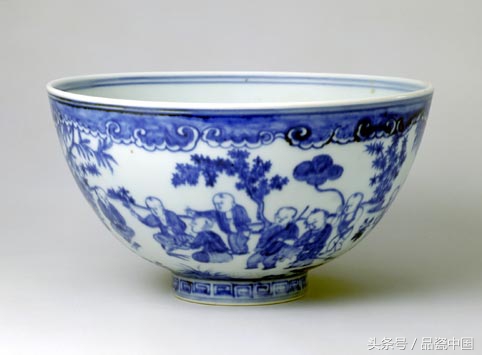