The so-called antique porcelain is an imitation of a certain product in the past, and its imitation quality pursues lifelike quality. Compared with the original product, it can reach the shape of the instrument. The tire, glaze and material are similar, and the decorative picture and the base can also be vivid. Just as Tang Ying, the famous pottery governor of the imperial kiln in the Qing Dynasty and the Qianlong period, said: “Imitating the old must respect its elegance and its appearance.” Starting from the concept of antique porcelain, Jingdezhen’s real antique porcelain It started from the Yongle Imperial Kiln Factory in the Ming Dynasty, which is inseparable from the interest and admiration of the emperor of the Ming Dynasty in advocating, recognizing and advocating ancient times.

The old collections of the Palace Museum in Beijing contain flower bowls and celadon bowls imitating Song Longquan from the Yongle Imperial Kiln Factory of the Ming Dynasty. In Xuande and Chenghua, the imperial kiln factory imitated the products of Song Longquan celadon and Ge kiln, Ru kiln, Guan kiln, Jun kiln, and Ding kiln according to the emperor’s will. This batch of antique porcelain pursued similarity and ancient charm, and did not seek chaos, and most of them lost their money. Chaoqinghua New Year. The antique porcelain of the imperial kiln factory in the Ming Dynasty was produced according to the emperor’s will, so some of the products can achieve “an antique coincidence with the truth.” 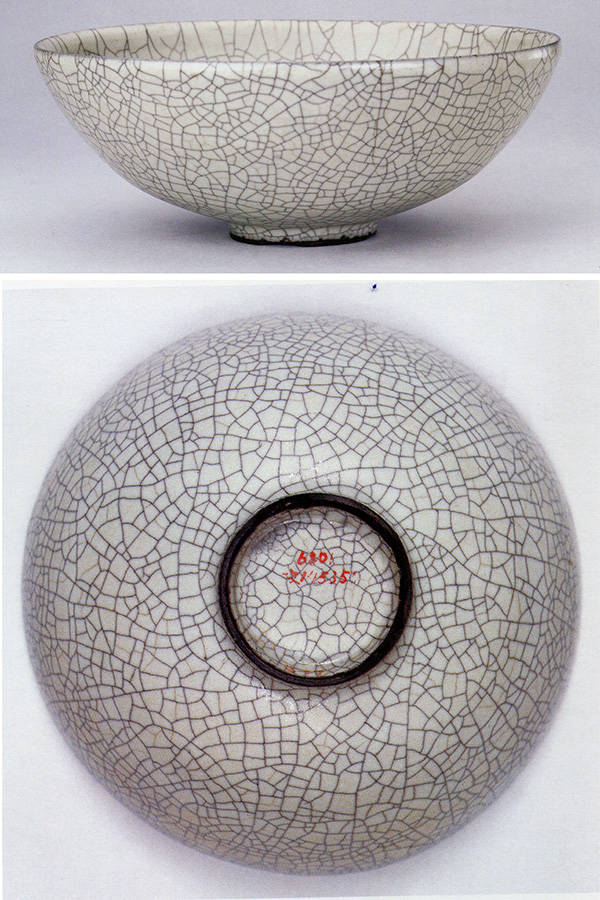 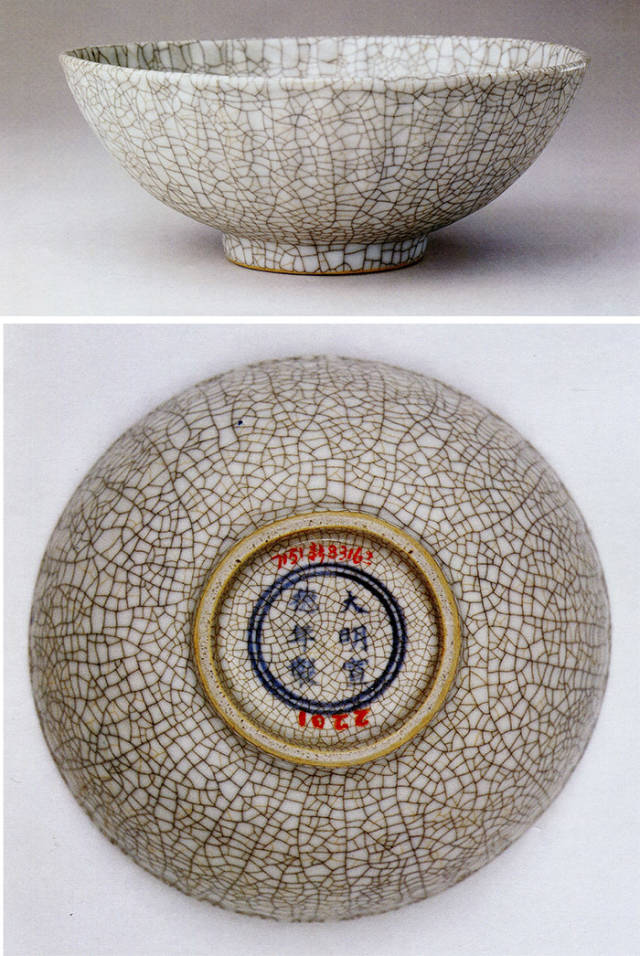 During the heyday of Kangxi and Qianlong in the Qing Dynasty, a new scene of prosperity appeared in the porcelain industry in Jingdezhen, and the antique porcelain also set off another climax. Qinglan Pu’s “Jingdezhen Pottery Records” Volume 5 “An Investigation of the Town’s Antique Kiln” records: “Guo Dynasty pottery is beautiful and prepared, workmanship is good, color is perfect, antique method first, flower sample style, salty moon Different years are different.” 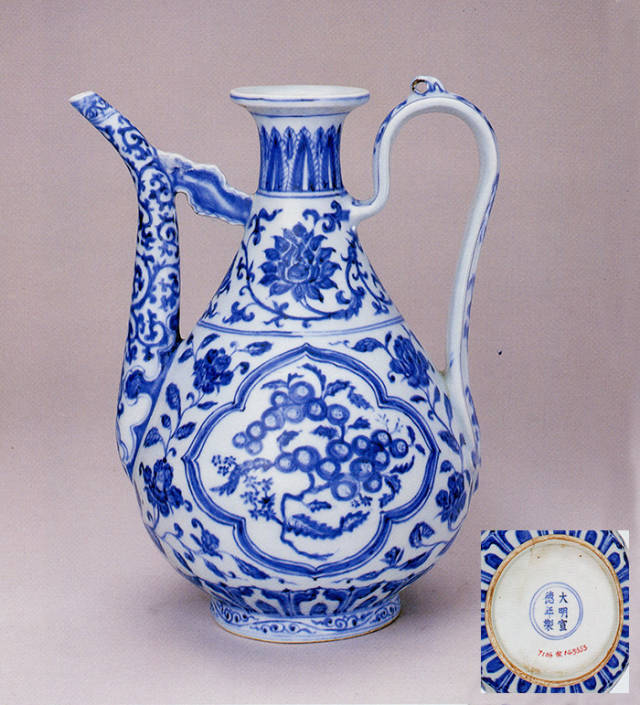 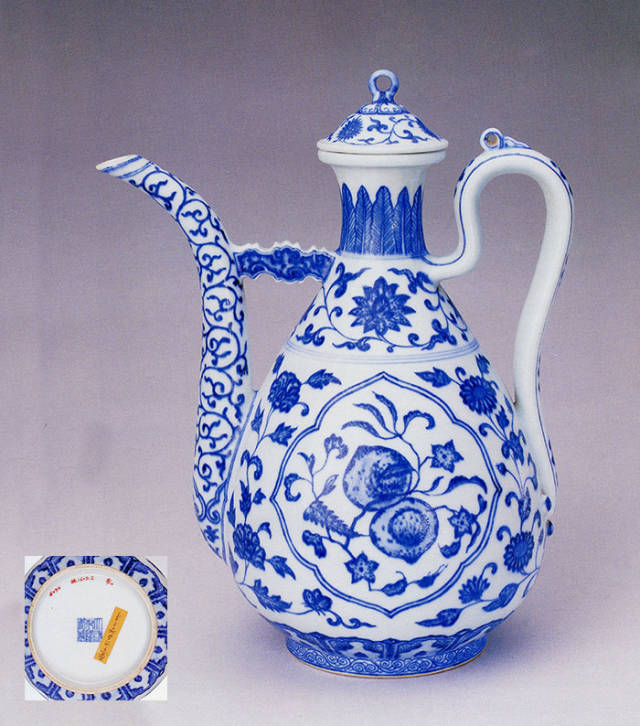 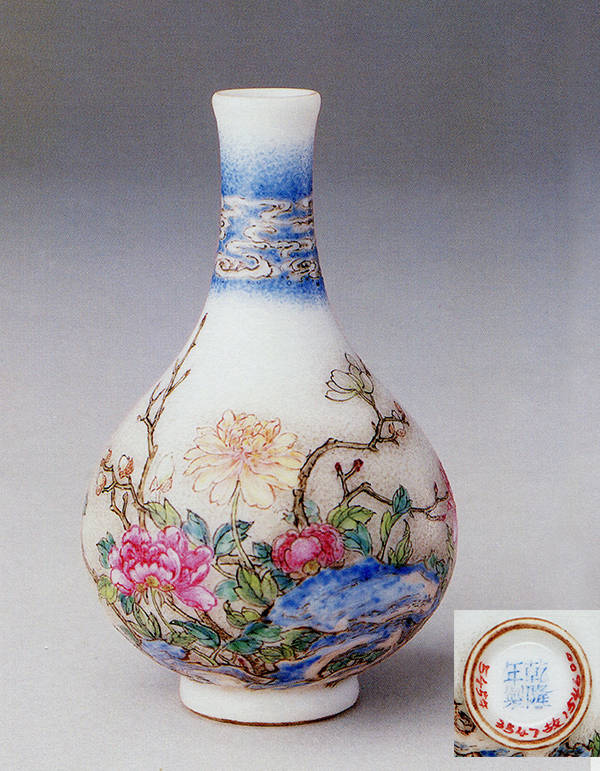 Picture: A small vase with a flower pattern imitating Qianlong enamel in the Republic of China (Collection of the Palace Museum, Beijing) 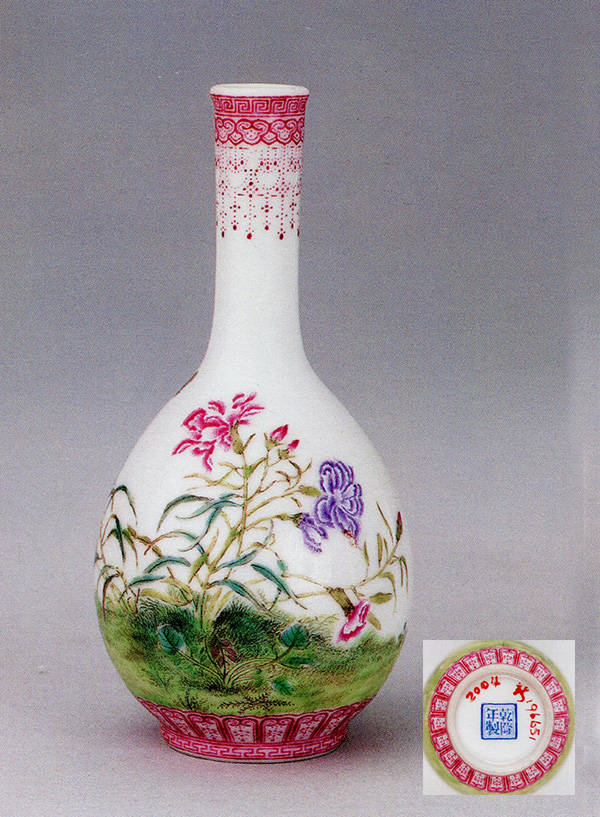 In the early 1980s, in order to solve the problem of insufficient funds in the museum, the Jingdezhen Ceramic Museum imitated ancient porcelains such as Yuan and Ming blue and white porcelains. The day when the collection of Yuan blue and white imitation was successful, it coincided with Mr. Geng Baochang, an ancient ceramic research expert in the Palace Museum, who graded the collection of ancient porcelain in the Jingdezhen Ceramic Museum. The husband was very happy to see the antique porcelain. He gave a high evaluation and gave the first imitation plum bottle. The price was 3,800 yuan, and it was immediately bought by Japanese tourists visiting the ceramic hall. Mr. Geng Baochang commented on antique porcelain and said that antique porcelain is the inheritance and development of ancient Chinese excellent ceramic culture. If the imitated ceramics can be seen by real experts in ancient ceramic appreciation, its value will be the same as that of national treasures. .

“Gold in times of difficulty, porcelain in flourishing ages” has become a law in the collecting world. Ceramics are a kind of works of art with great collection value. The collection of genuine products is rare and precious, but the price is high and there are many fakes, which discourages the average working class. Today’s new porcelain has become an antique handed down after decades, centuries, and millennia.

Antique porcelain has always been recognized in the field of ceramic collection. In recent years, with the improvement of people’s living standards and the enhancement of appreciation ability, it has become more sought after by ceramic lovers. 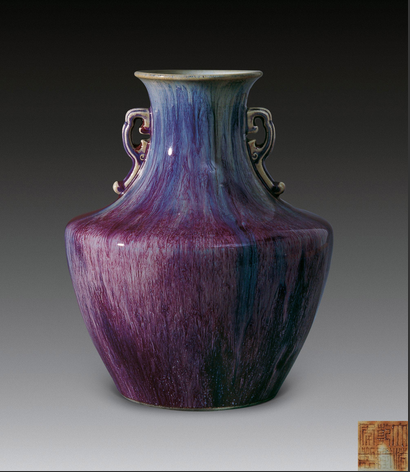 On November 5, 2014, at the Sotheby’s auction in London, a Qing Qianlong imitation Ru-glazed flower goblet was sold for 4.755 million Hong Kong dollars; 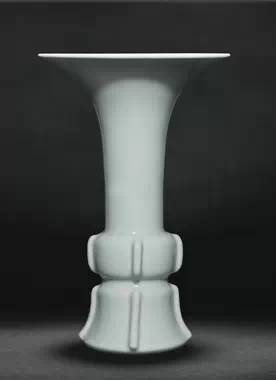 On December 3, 2014, at the Beijing Poly Auction, a Qianlong imitation official kiln Guan-ear vase was sold for RMB 1.265 million; 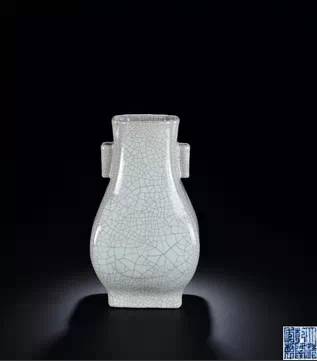 On June 25, 2011, at the Shanghai Xinhua Spring Antique Art Auction, the Mingyong Le blue and white lotus market was sold for 5.194 million yuan; 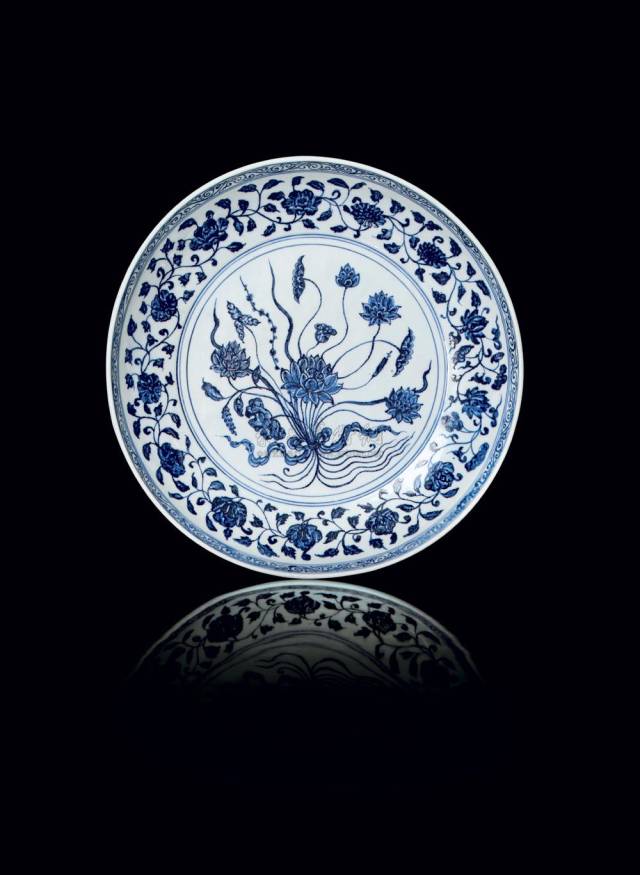 On September 6, 2014, at the Sotheby’s auction in New York, a blue and white lotus plate imitation of the Yuan Dynasty from Qianlong of the Qing Dynasty was sold for 726,700 Hong Kong dollars; 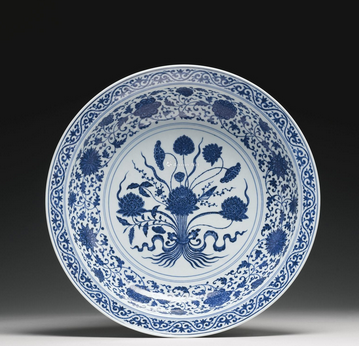 On October 25, 2014, at the Beijing Hanhai Autumn Auction, a bouquet of blue and white lotus plates from Yongzheng Huangdi of the Qing Dynasty was sold for 18.4 million yuan; 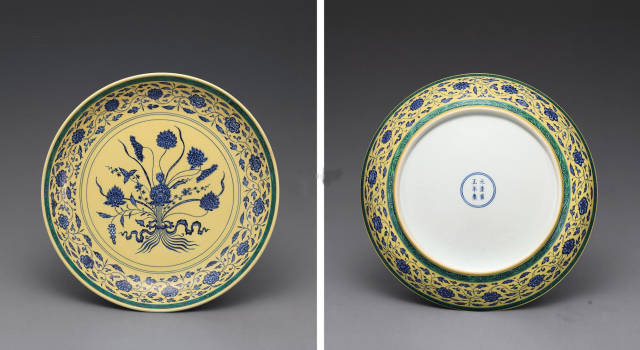 On October 5, 2011, at the Sotheby’s Autumn Auction in Hong Kong, the Ming Yongle blue and white folding flower and fruit plum vase was sold for RMB 1383.12 billion; 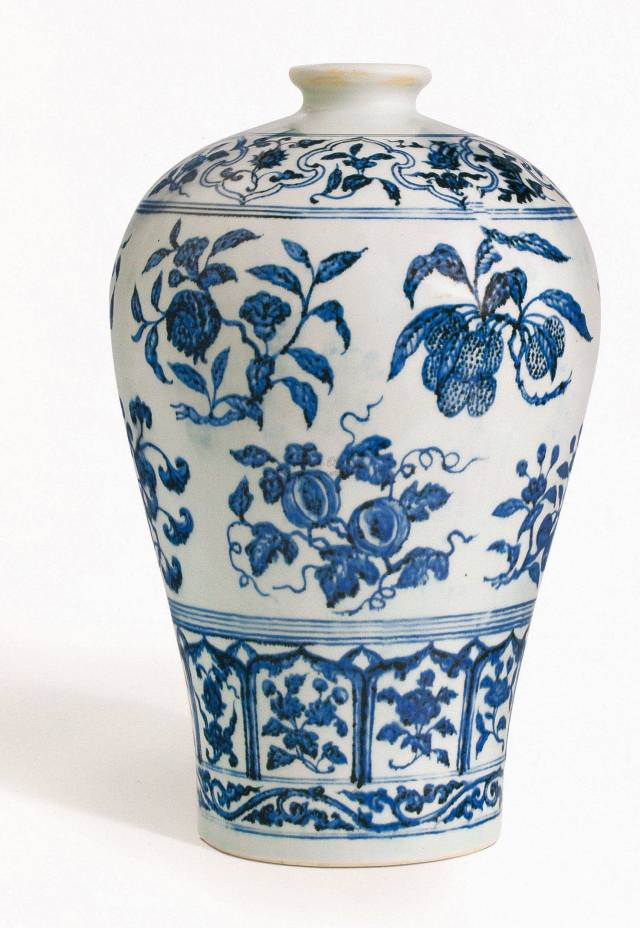 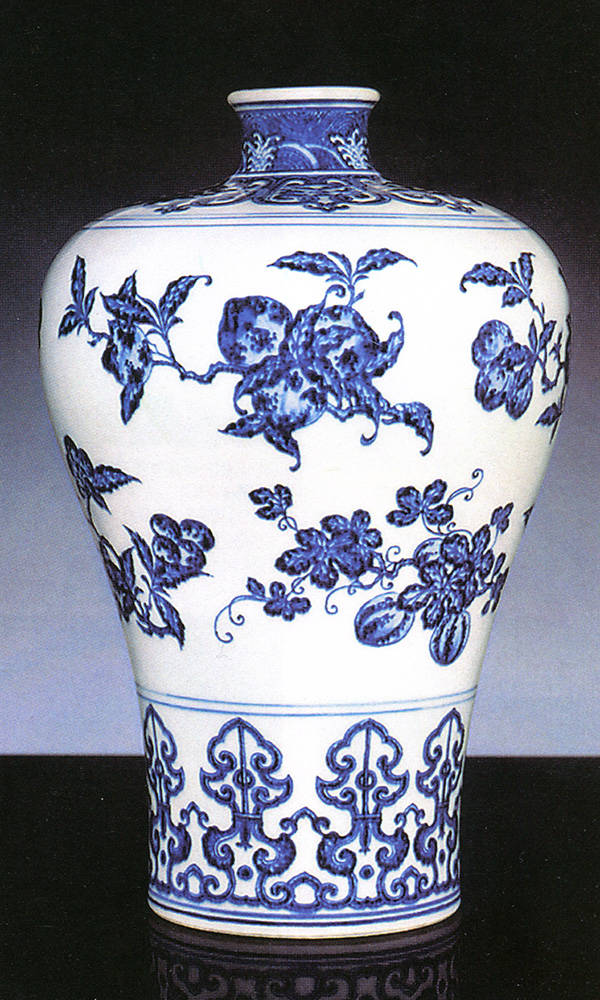 On May 19, 2011, at the Beijing Hanhai Spring Auction, the Qing Dynasty Qianlong blue-and-white folding branch flower and fruit plum vase was sold for 23 million yuan; 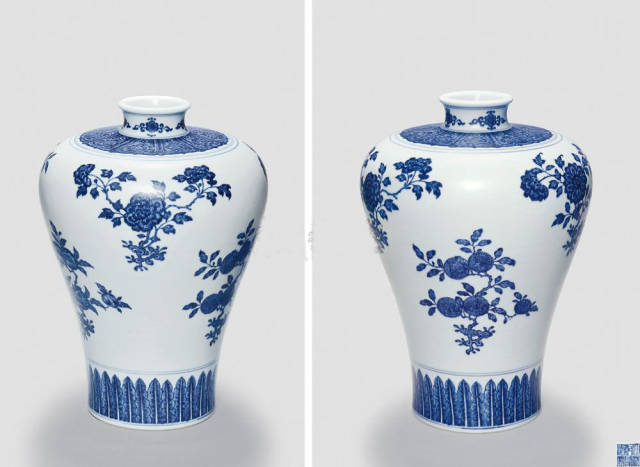 On June 28, 2013, at the Beijing Jiuge Auction, the Qing Yongzheng imitation Yongle blue and white holding moon vase was sold at a price of 6.325 million yuan; 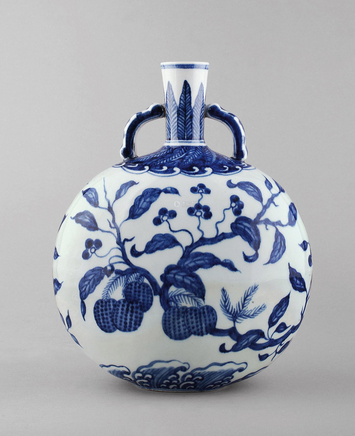 On December 3, 2014, at the Beijing Poly Auction, a Qing Yongzheng imitated Huayuntuo Eight Treasure Cup was sold at a price of 1.2243 million Hong Kong dollars; 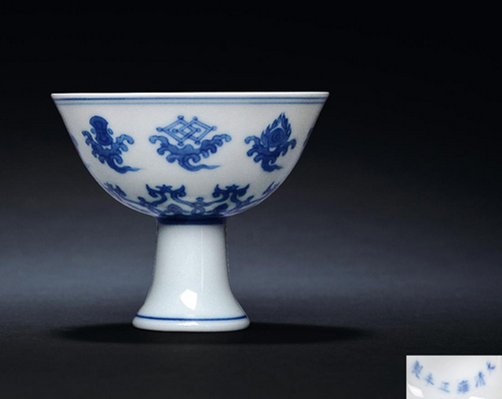 On May 2, 2005, at the Sotheby’s Spring Art Auction in Hong Kong, the Qing Dynasty Yongzheng blue and white bamboo and stone plantain jade pot spring bottle was sold for 4.876 million yuan; 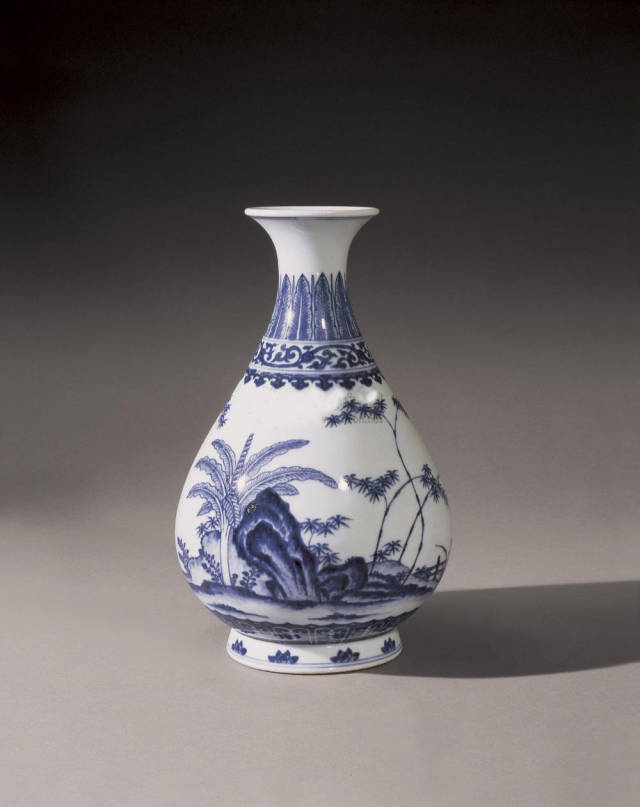 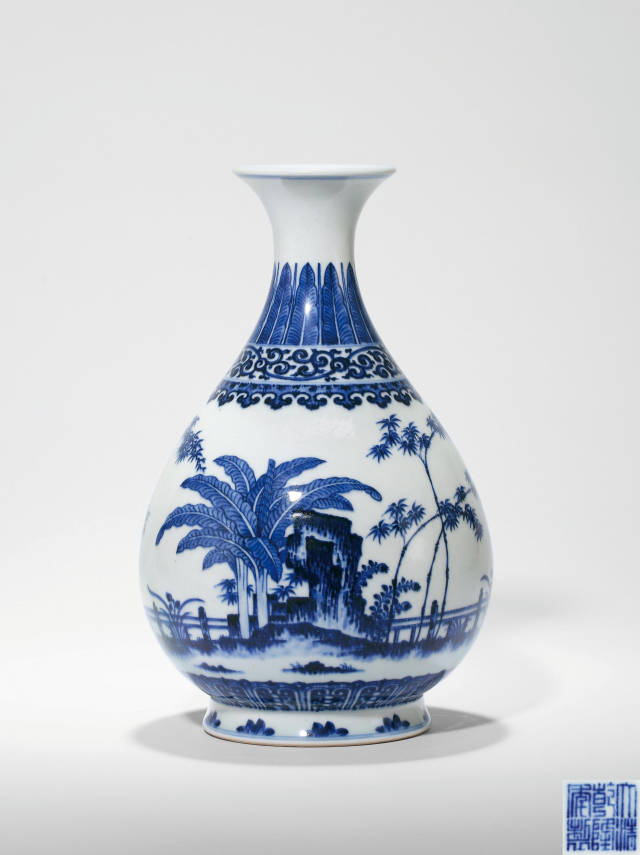 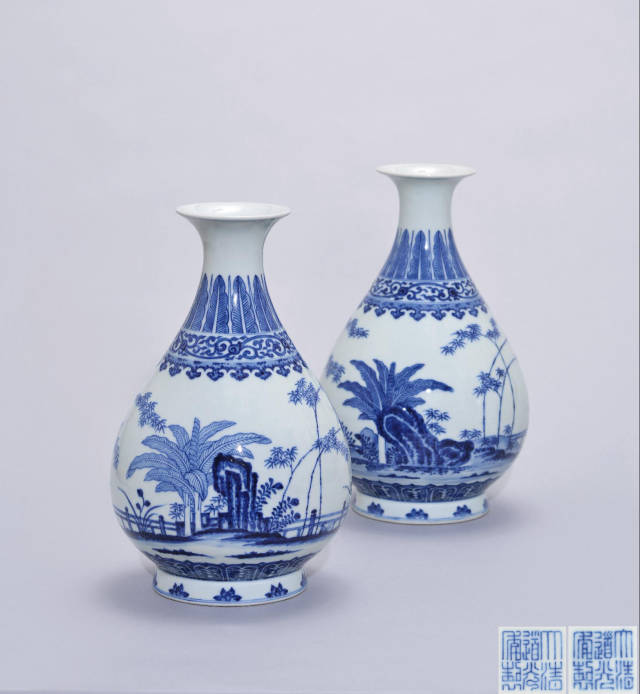 On August 11, 2007, at the Shanghai Jiatai Auction, an antique Yuexuan enamel and brocade Ladies vase was sold for 418,000 RMB; 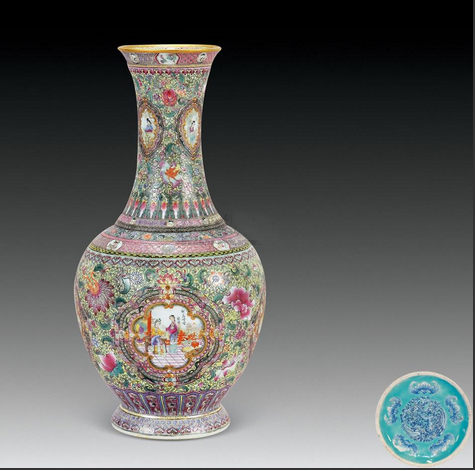 On December 7, 2008, at the Shanghai Jiatai Auction, a Republic of China imitation “Guyue Xuanzhen” famille rose Luohan Tucong bottle was sold at a high price of 403,200 RMB; 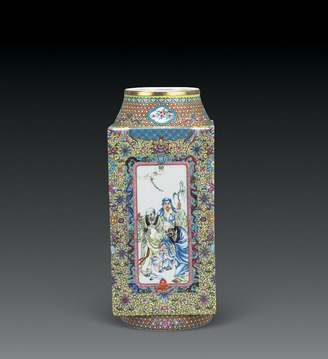 On March 26, 2012, at the China Guardian auction, a bottle with an imitation enamel dog pattern from the Republic of China was sold for 172,500 RMB; 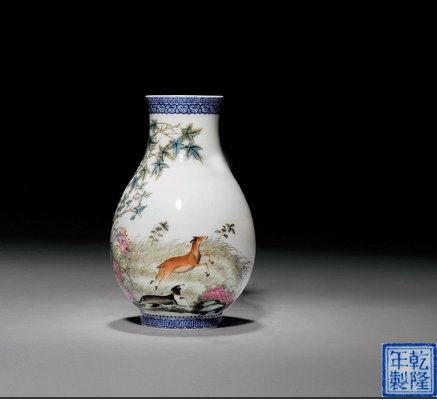