1. The fetus is generally thick and heavy, and the fetus is not as delicate and white as the Ming and Qing Dynasties, and slightly loose. Using the “dual formula” of porcelain stone and kaolin, the content of alumina in the porcelain body has increased significantly, generally around 20%.

2. The glaze is generally thicker, the color is blue and white, and it is often less moisturized. Usually called egg blue, the brighter ones have a slightly weaker blueness and whiteness, which is obviously different from the glazed color of Ming and Qing porcelains. 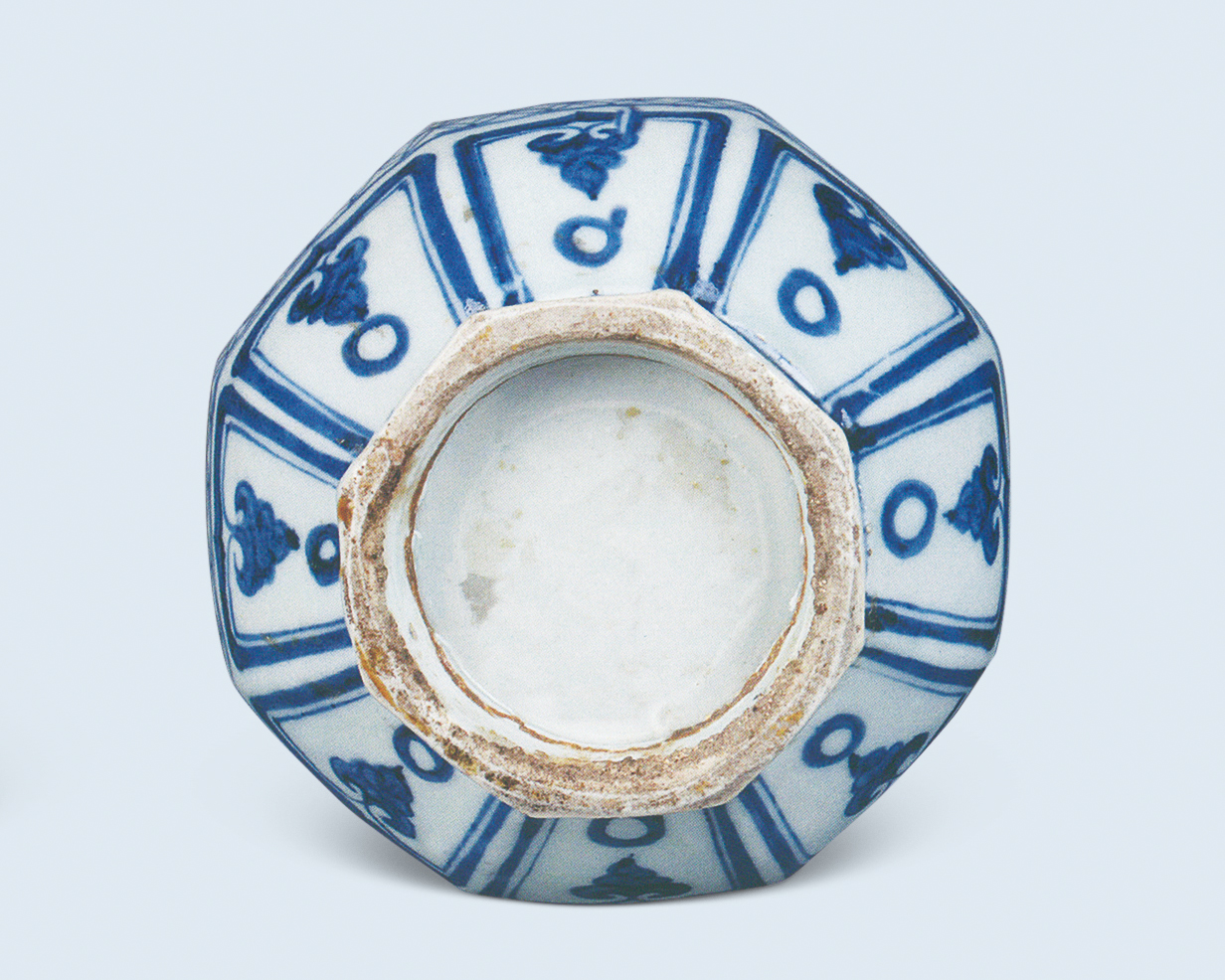 3. Except for the Yuhuchun bottle (Figure 1), the bottom of the vessel is unglazed, and most of them have obvious swirl marks (Figure 2). Sticky sand is common, and there are occasional knife marks (Figure 3). Plates, bowls and the like have heart protruding heart. 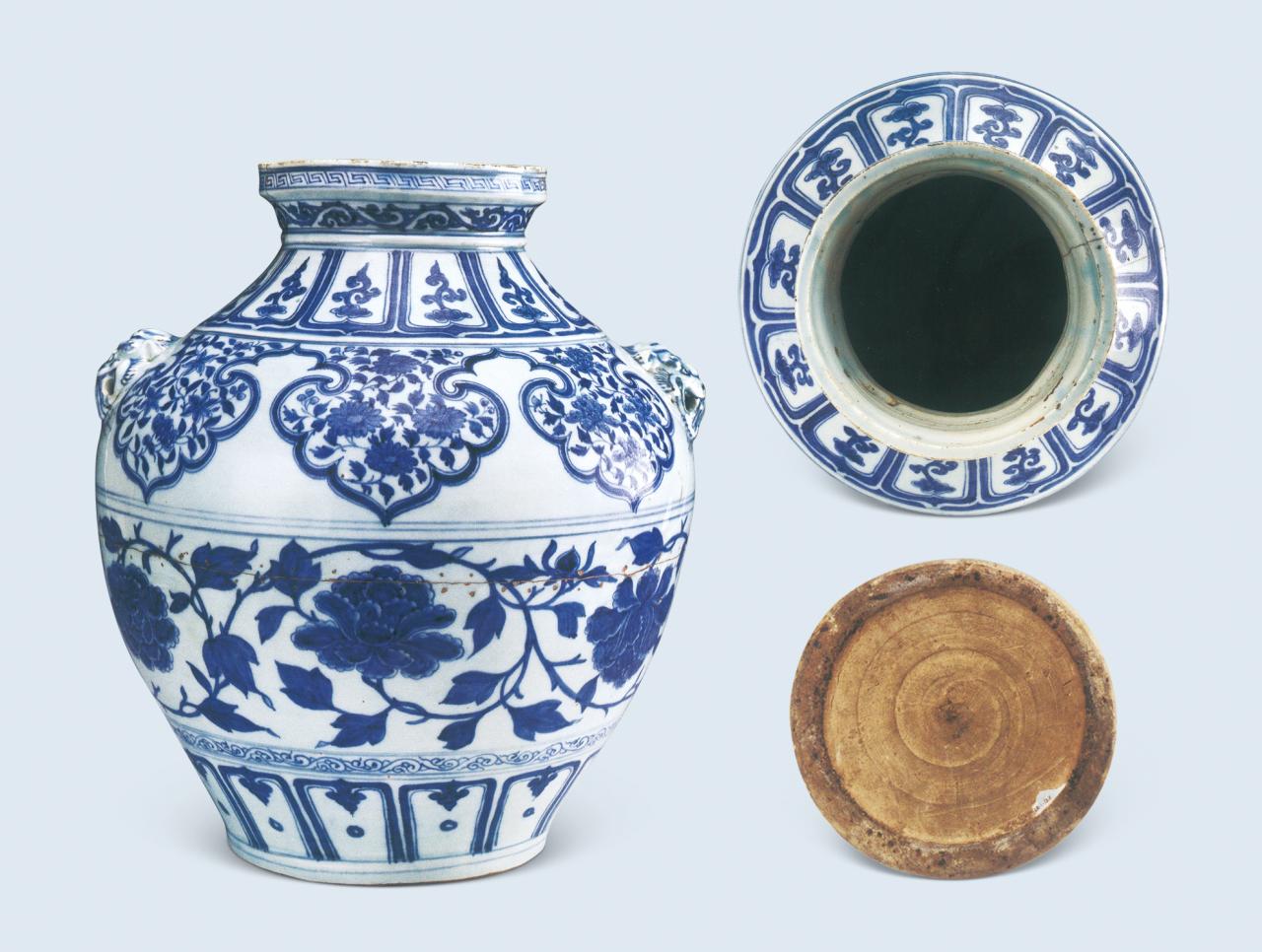 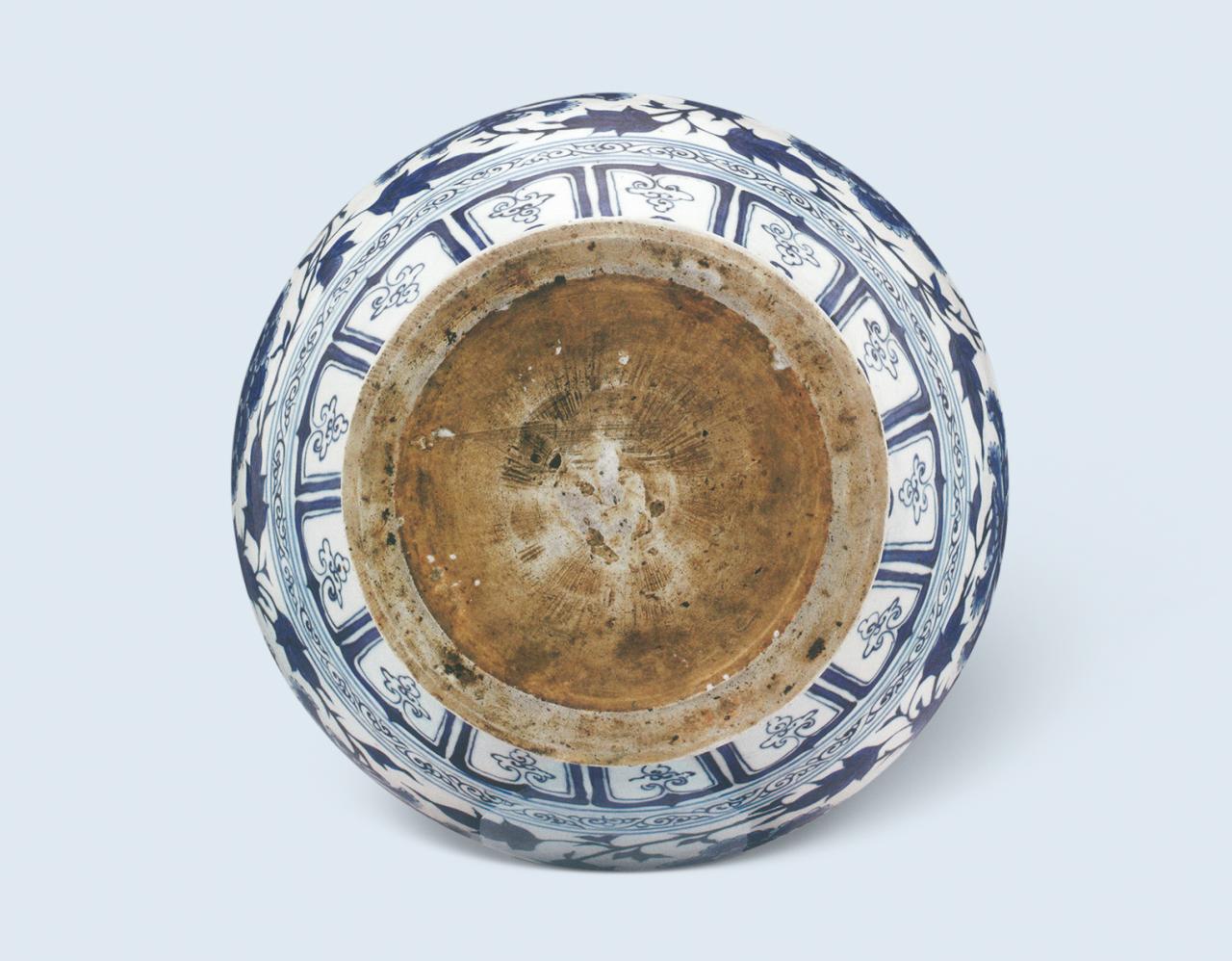 4. The ring feet are generally irregular and twisted, and the outer walls are often beveled (Figure 1). The glaze is not in the end, and “flint red” is often seen where the tire is exposed.

5. Irregular glaze spots are common on the outsole of large objects, and uneven glaze is often seen on the inner wall (Figure 2).

6. Large objects such as bottles and cans are first formed into sections and then spliced ​​together with obvious joint marks, especially the bottom joint (Figure 2). 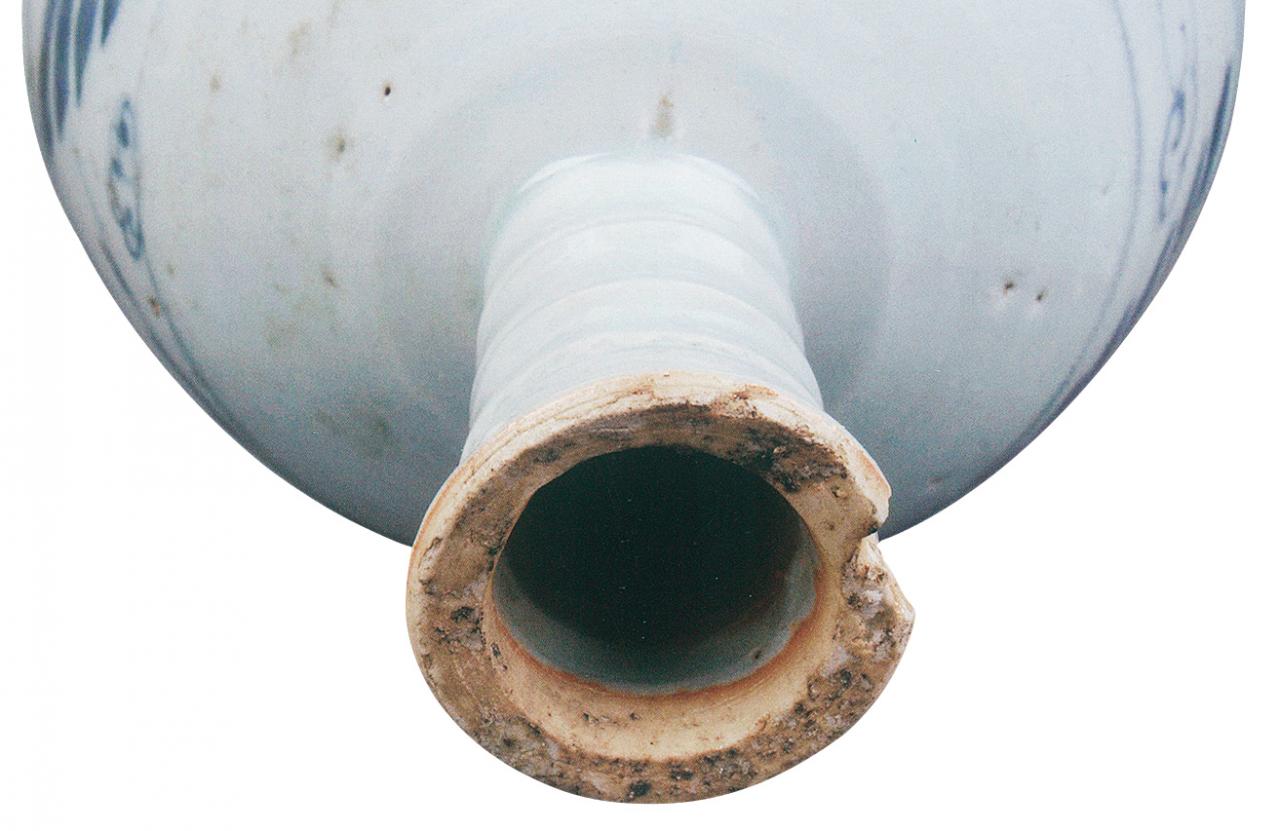 7. The foot of the goblet adopts the fetal joint method, and it is hollow without a back cover (Figure 4). The mouth of the plum bottle is mostly trapezoidal with a narrow top and a wide bottom (Figure 5, Figure 6, Figure 7). 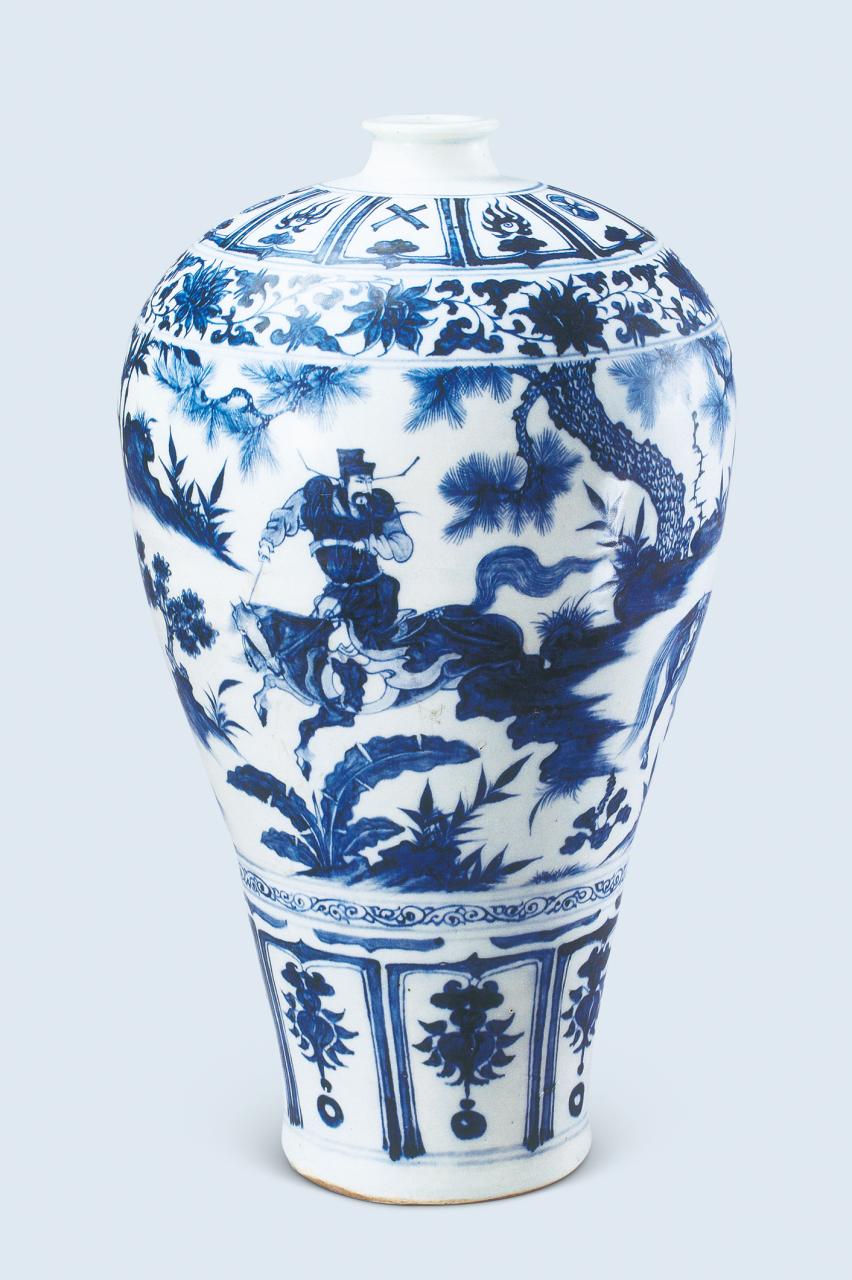 Figure 5 The blue and white Xiao Heyue chasing Han Xin, the plum vase, which was unearthed from the Muying Tomb in Jiangning County, Nanjing, Jiangsu in 1950 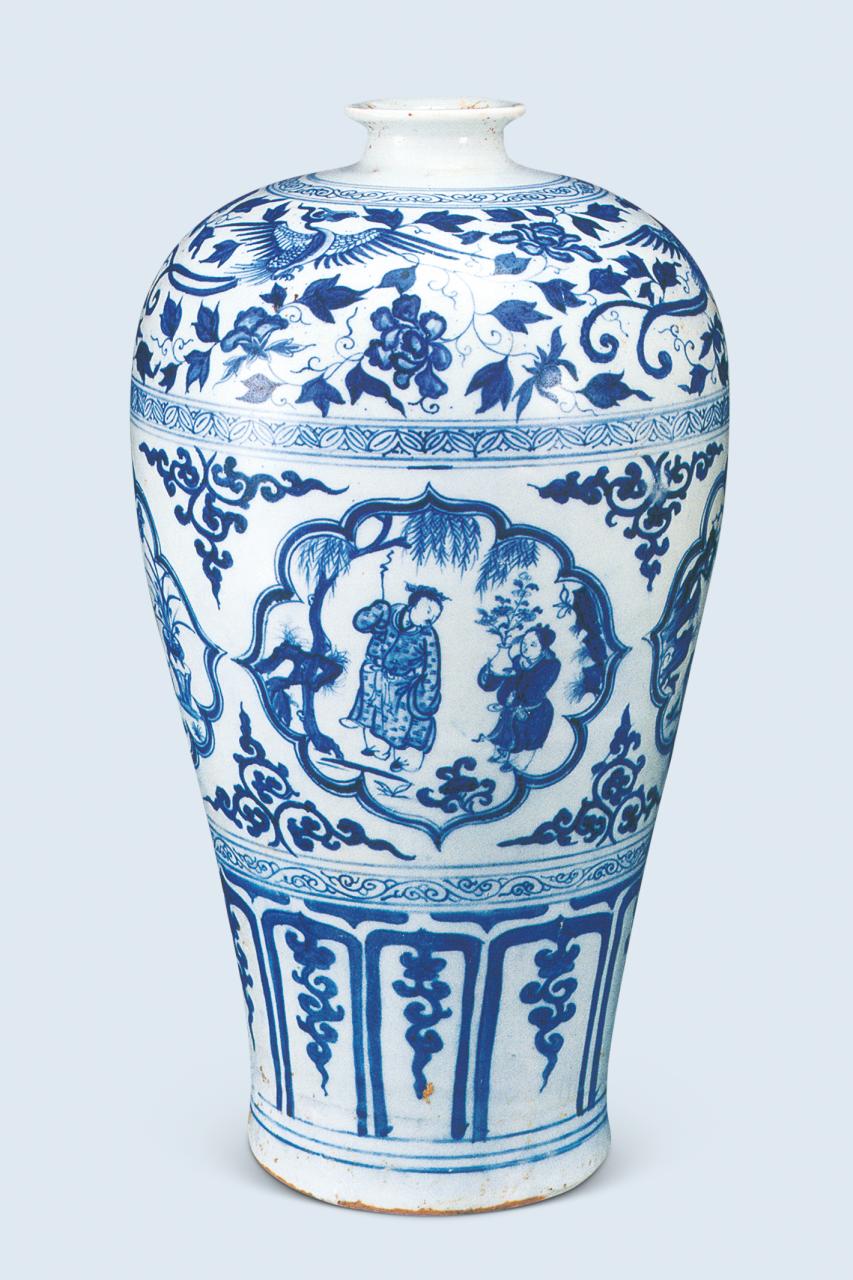 Figure 6.1 The blue and white four-love picture plum vase was unearthed from the Tomb of King Yingjing in Zhongxiang City, Hubei Province in 2006 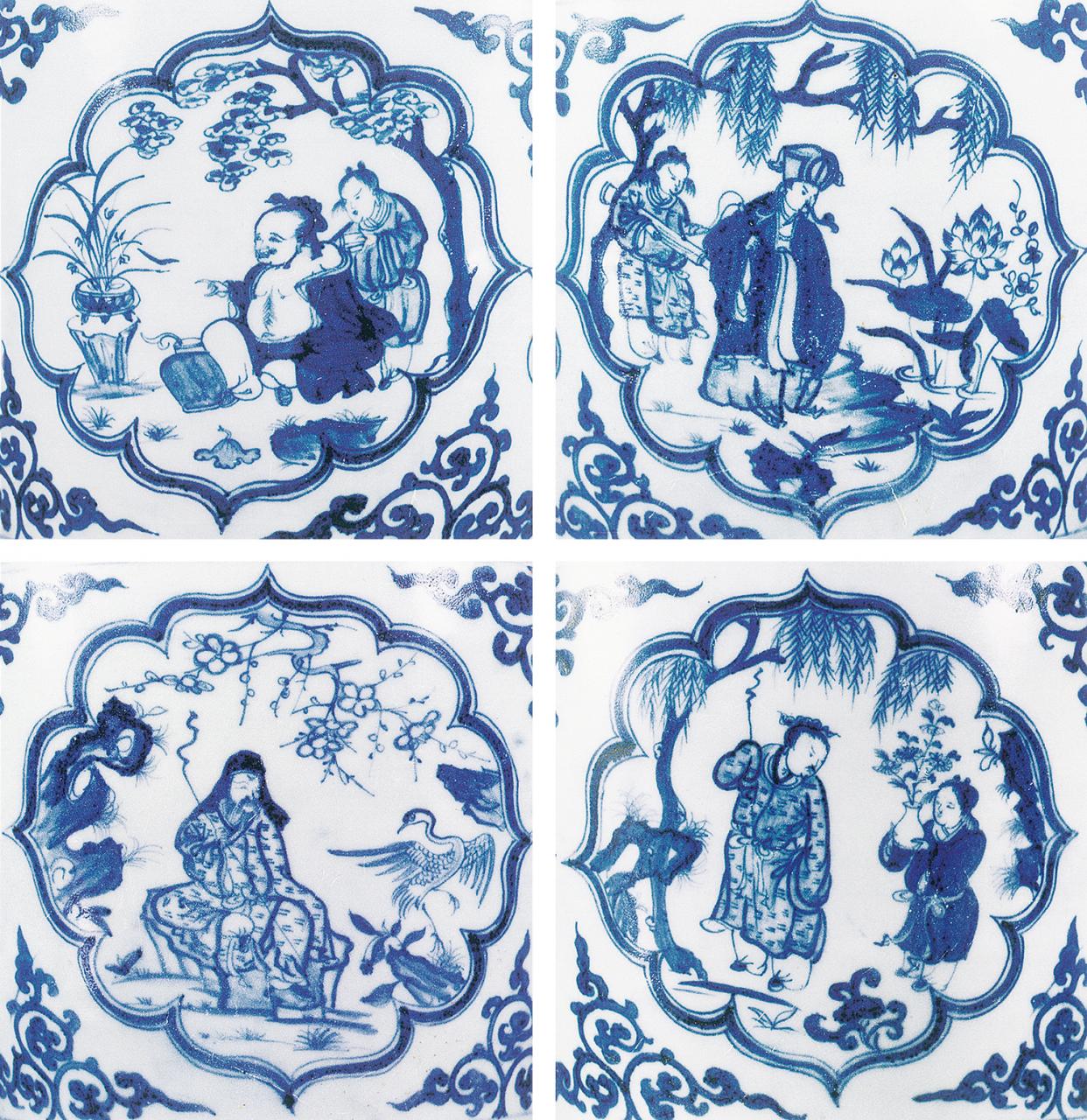 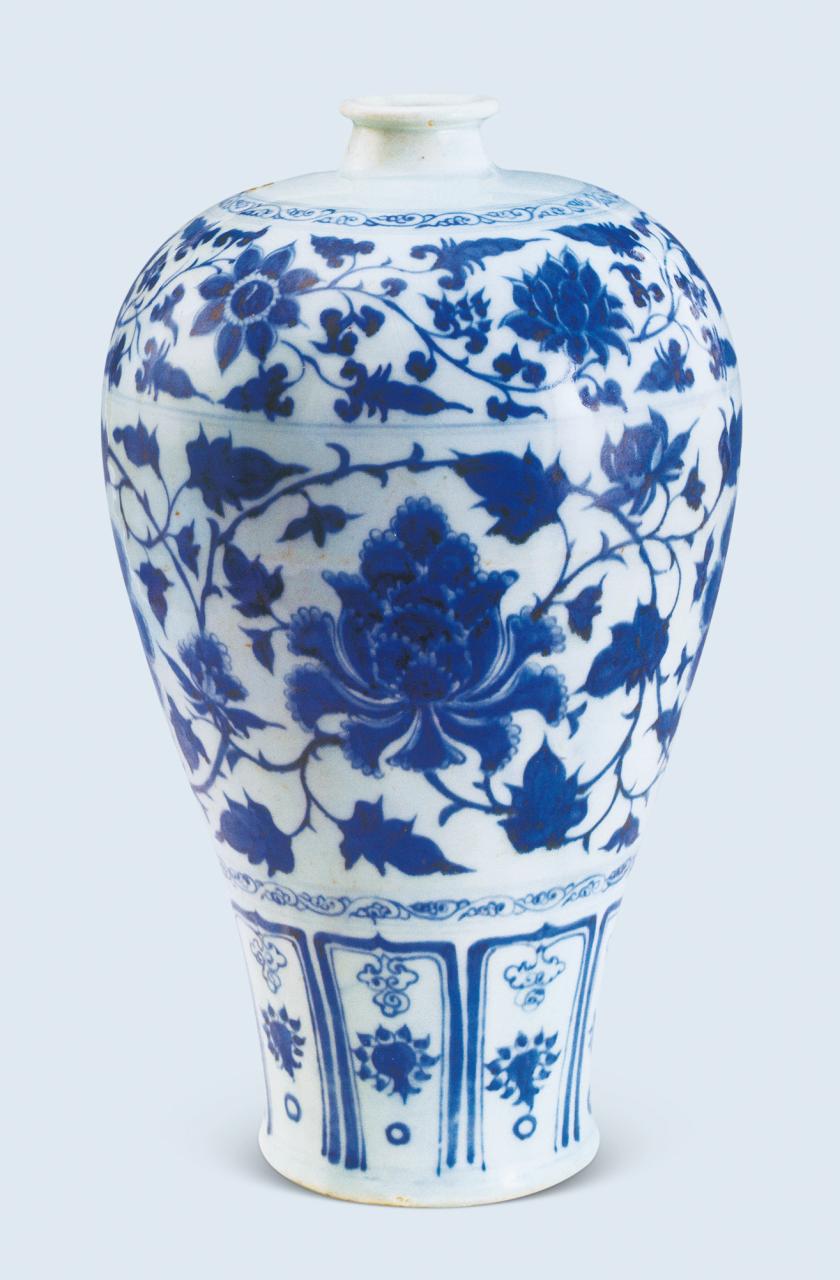 The cobalt used in blue and white porcelain in the Yuan Dynasty was divided into domestic and imported. The color of domestic cobalt material is gray, and the blue and white color of the imported cobalt material painting is strong, clear, clear and elegant, with black spots from time to time, and shiny metal, commonly known as “tin light.” The typical Yuan Dynasty blue-and-white porcelain produced in Jingdezhen mostly uses imported cobalt materials, while domestic materials are mostly used for small objects, such as artifacts unearthed in Southeast Asian countries such as Indonesia and the Philippines, as well as Jizhou kilns in Jiangxi, Yuxi and Jianshui kilns in Yunnan, and Zhejiang Utensils burned in Jiangshan area. 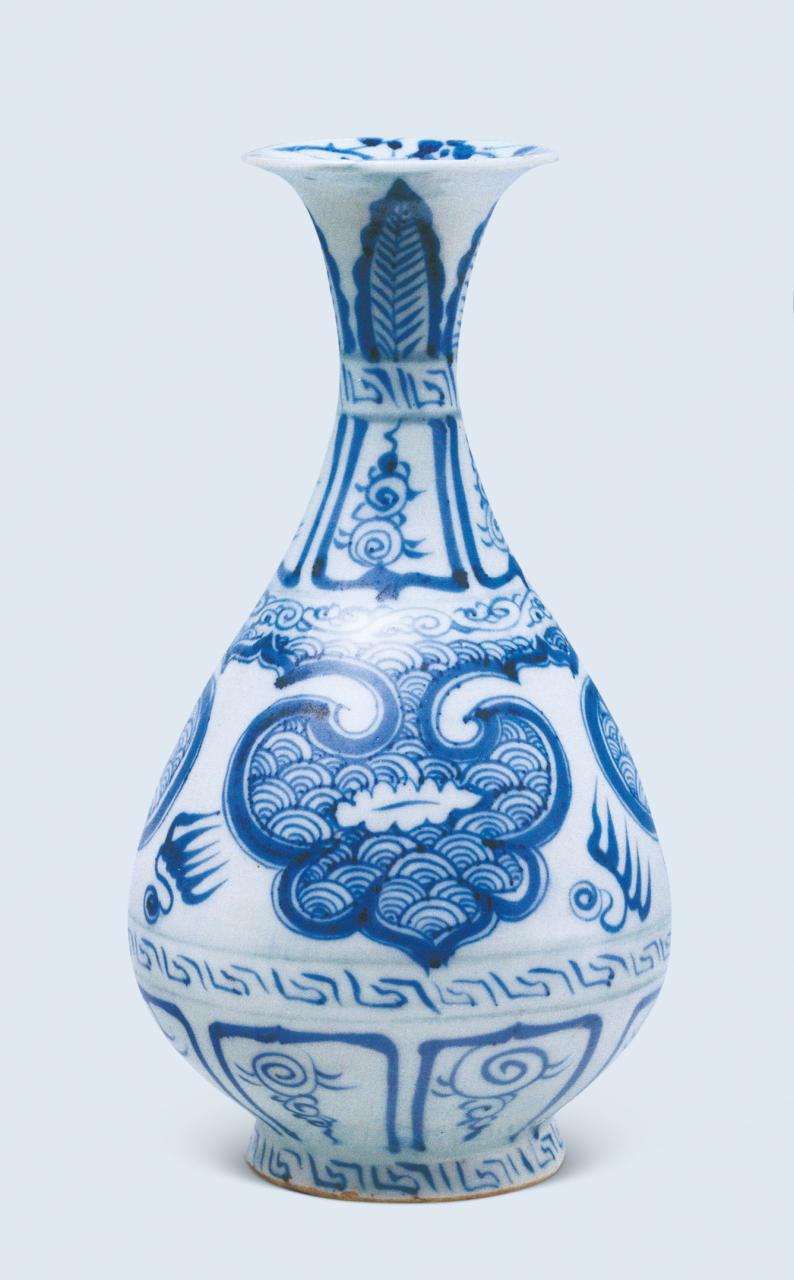 Regarding the source of the imported cobalt used in the typical Yuan Dynasty blue and white porcelain in Jingdezhen, because there is no record in the Yuan Dynasty literature, it has always been a hot issue in the study of ancient ceramics scholars at home and abroad, and there are different opinions. Some British scholars believe that the color materials used in Chinese blue and white in the 14th century were imported from Persia. Scholars in the United States found that there was no evidence of cobalt deposits in Persia and Pakistan after careful examination of geological data. They only found one document that recorded arsenite in India. Japanese scholars believe that the cobalt material used to make blue and white was originally a cobalt-containing blue glass material from the Western Regions. Some scholars believe that the blue and white porcelain in the Yuan Dynasty was originally made from broccoli imported from the Far East. In the early stage of blue and white production, China had developed a method of mixing broccoli and cobalt earth to prepare underglaze blue and white pigments. Chen Yaocheng of the Shanghai Institute of Ceramics has done a lot of research on the source of blue and white cobalt materials in the Yuan Dynasty, and believes that the composition characteristics of the cobalt materials used in the typical Yuan Dynasty blue and white porcelain in Jingdezhen are high iron and low manganese, and high iron trioxide/cobalt oxide ratio ( 2～4.5), the ratio of manganese oxide/cobalt oxide is low (less than 0.07), and contains sulfur and arsenic, but basically no copper and nickel. Compared with the data of cobalt ore, the composition of cobalt-rich cobalt arsenopyrite without copper and nickel is the closest to this composition characteristic. This cobalt arsenopyrite is likely to come from Central Asia and Europe, but it may also come from my country’s Gansu and Xinjiang regions with the same geological structure as Central Asia. 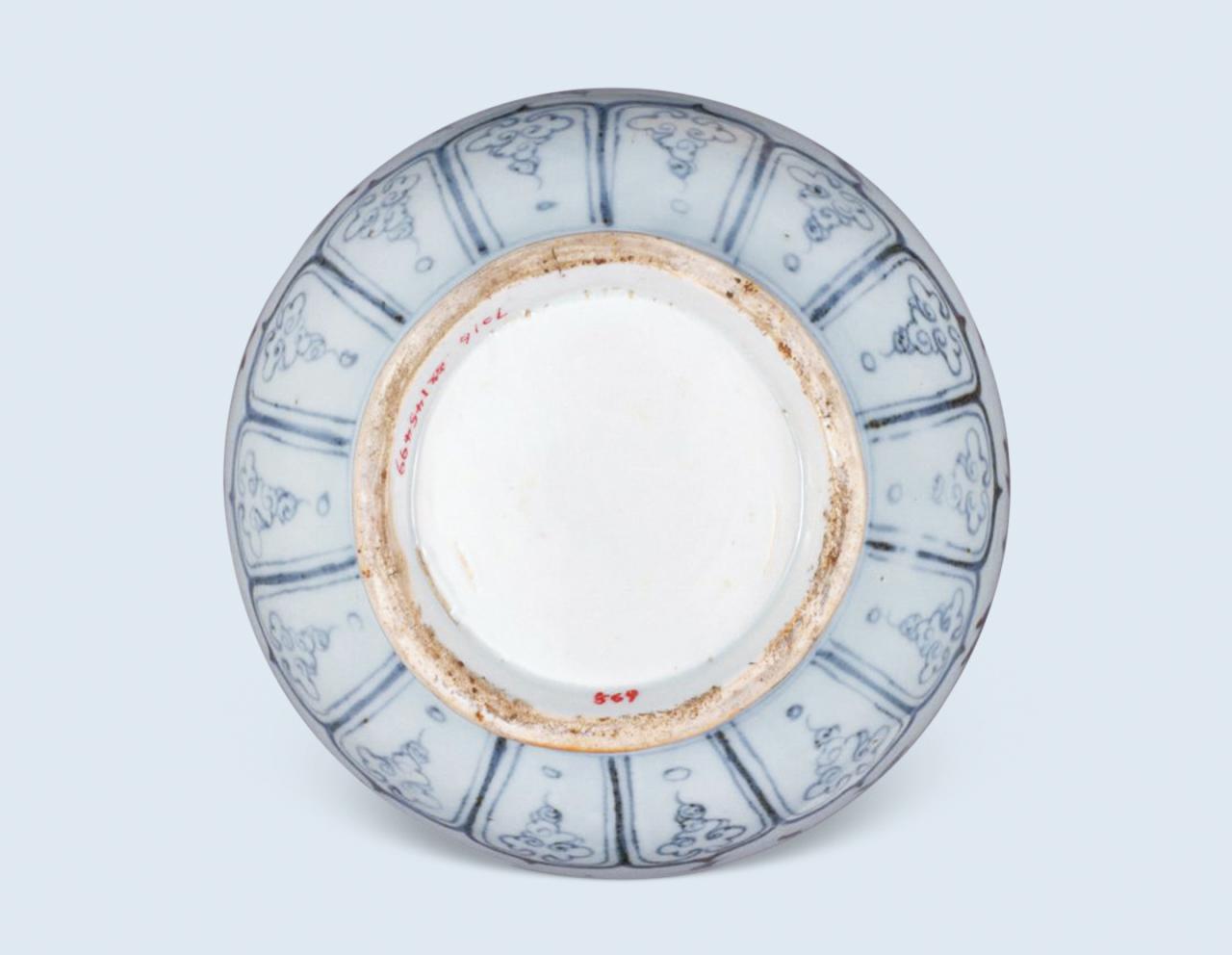 Imitations of Blue and White Porcelain in Yuan Dynasty 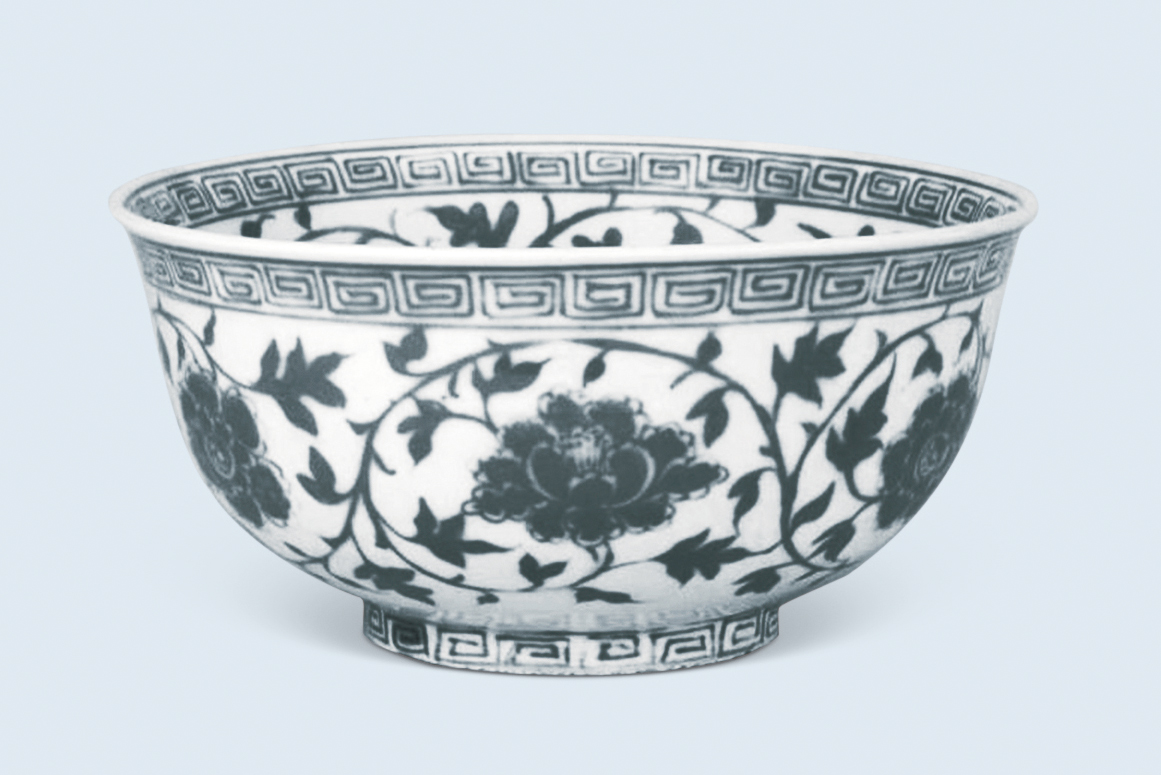 1. The imitation model is not accurate enough, not natural enough, and easy to be dull. The patterns of the painting are all copied from the original drawing, the pen line is awkward, restrained and weak, not as easy as the real product. The overall appearance is more than exquisite but simple and simple.

2. Imitations often use modern tools such as ball mills, which tend to be too fine and white, and sintered densely. The glaze is often white, and modern air pumps are used to blow the glaze. The glaze is smooth and flat and not thick enough.

3. “Flint Red” generally uses the method of smearing and spraying iron oxide, which is easy to be too thick or too large, and the whole is unnatural.

4. The low-end imitations are formed by modern grouting, so that the fingerprints and swirls of the hand-drawn blanks are not seen on the inner wall of the utensils.

5. Imitations are easy to be inaccurate, heavy or light.

6. The composition of the cobalt material used in the typical Yuan Dynasty blue and white porcelain is high iron and low manganese. The imitation is made of high-manganese and low-iron domestic cobalt material, which is not easy to form black spots, so iron needs to be added. As a result, the black spots are too dense. The color is heavy, and the blue and white hair color is grayish.

Article source: “Collector” Issue 201907 “Analysis of the characteristics of the era of blue and white porcelain in the Yuan Dynasty”